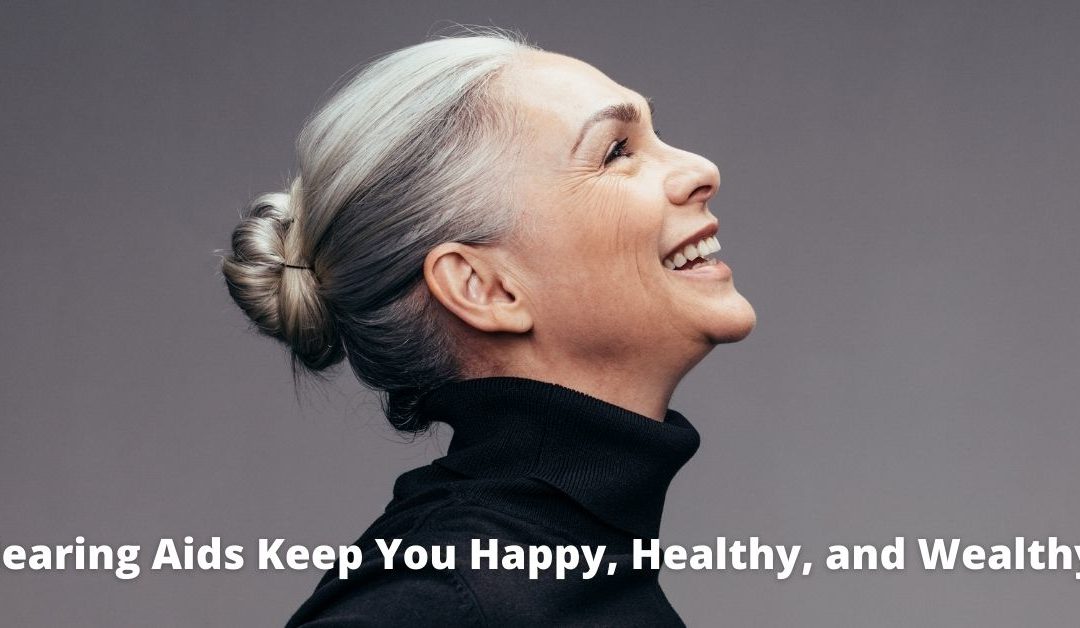 Hearing loss in America is at an all-time high, both in terms of raw numbers and percentages. Today there are over 48 million Americans with hearing loss, and about 29 million of them could benefit from hearing aids. While 2% of adults aged 45-54 have disabling hearing loss, that number climbs to 50% for those over 75.

This means that drawing statistical conclusions about the effects of hearing loss on those who suffer from it is also easier than ever, and the statistics seem to point consistently to the fact that those who treat disabling hearing loss with hearing aids, rather than leaving it untreated, report greater overall satisfaction in life, are at lower risk for various ailments, and earn more (if they are still in the workforce).

One of the most common side effects of untreated hearing loss is loneliness and, eventually, depression. When our hearing ability drops to the point where conversation is difficult, we tend to withdraw from social engagements that we might have been excited about only a few years earlier. Even when we do find ourselves in social situations, the inability to hear other people well can make us feel isolated. Conversations swirl around us, but we can’t hear what’s being said.

Those who treat their hearing loss with hearing aids, on the other hand, enjoy a hearing ability that is near normal. In many cases, they can participate in conversation as though they suffered no hearing loss at all, and sometimes even better. Hearing aids today are programmed or “fitted” exactly for the hearing loss you have, and powerful DSP (Digital Signal Processing) helps hearing aids coordinate with multiple internal microphones and speakers to present a realistic amplified image of the space around you.

96% of those who get hearing aids, when asked after one year, say their life has measurably improved since wearing them. Nearly 50% of hearing aid wearers say their relationships at home and at work have improved as a result of hearing aids. They report having greater independence, a better sense of safety, and even say their memory has improved since getting hearing aids. (There is science behind the idea that memory improves with hearing ability; the auditory cortex of the brain is hard-wired to short term memory.)

Hearing aid wearers even report having a better self-image and greater self-esteem than those with untreated hearing loss, and a better sense of optimism not only about their own lives but about the world in general. Sounds pretty good, right?!

New science on loneliness tells us that chronic loneliness—a common outcome in cases of untreated hearing loss—is as physically bad for us as smoking 15 cigarettes a day. Our bodies cry out for connection with our fellow human beings, and if we’re adjusted to hearing culture, losing our hearing poses a significant barrier to having our need for connection met.

It’s not only the direct effect that losing our hearing has on our ability to communicate, but more subtle changes throughout the brain and body that pose health risks with untreated hearing loss. Our auditory cortex will typically atrophy in the absence of information coming in from our ears. It’s not that the brain cells die, but that the support structure holding the neurons in the auditory cortex at working distances starts to collapse. This can cause memory trouble in the short term, and can even make us lose the ability to understand speech even at the times we hear it clearly. It’s for this reason that many audiologists offer hearing aid training courses to new wearers: they need to learn to hear again!

Left untreated for long enough, hearing loss puts us at a much higher risk of early onset of cognitive decline and dementia. It also decreases our ability to balance, leading to an increased risk of physical injury due to falling. Age-related hearing loss that happens more rapidly than normal can even be an early indicator of an underlying cardiovascular issue. By getting regular hearing tests, your audiologist can alert you if your hearing ability is declining faster than one should expect.

It should come as no surprise that those whose hearing ability declines while they are still in the workforce can face even greater difficulties than those who do not work. Work can be a place where all the stereotypes about being “old” and losing your hearing come together. If you’re having trouble hearing, and especially if you’re not planning to retire right away, hearing aids are a crucial part of keeping up your ability to do your job as best you can.

Get a Hearing Test

The Better Hearing Institute, a non-profit organization, recommends getting a hearing test once every decade until age 50 and once every three years thereafter. If you’re due for a hearing test, get one today and start keeping track of your hearing health: it will help you to stay happy, healthy and wealthy, and that makes you wise!